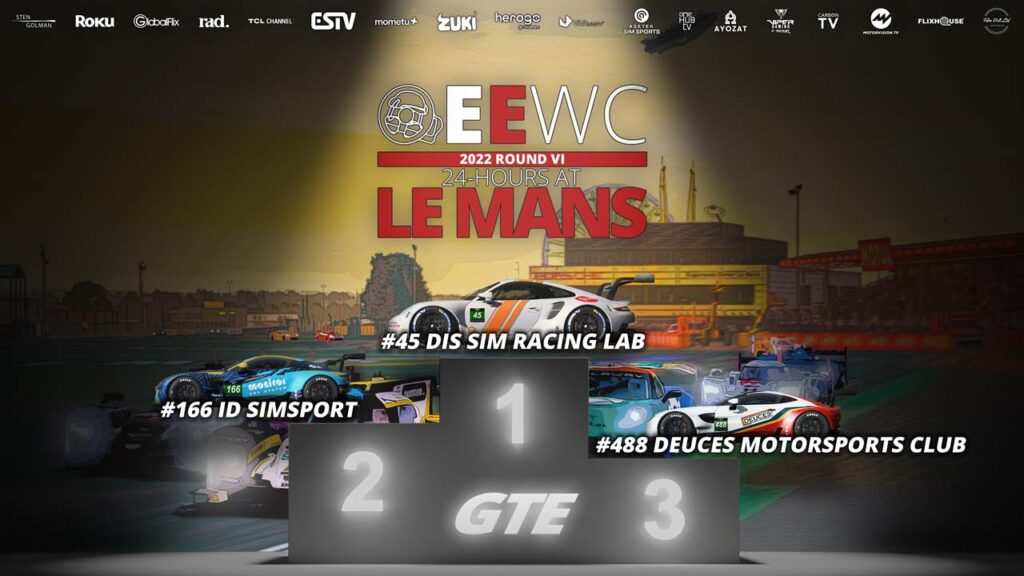 Races can be won in a plethora of ways. Teams can win on superior fuel strategy, having fewer tire changes thus spending less time in the pits, being cautious and avoiding accidents, and preparing equipment vigorously to avoid hardware failure. But, in the end, all it comes down to is who travels the farthest distance in 24 hours.

Through the season we have seen some stunning performances by the #45 DIS Sim Racing Lab. They have at some point or another led most of the races of the season. And finally, for Le Mans the final round of the season, they pulled off the win with Andi Kurtsen, Andreas Olesen,  and Rasmus Thulstrup at the wheel.

A huge congratulations to all the GTE Podium finishers!

For the championship, the #74 Deuces Motorsport Club with Vojta Polesny, Tonnie Jansen, Joao Barbosa, Roy De Muinck, and Juha Maki-Jouppi pretty much just needed to show up and finish the race. The #27 MCM-Motorsport suffered a catastrophic hardware failure that sent the car barreling onto the tire wall at Mulsanne corner at full speed.

This event was very close to elevating the #45 DIS Sim Racing Lab to second in the championship, but because there is no rule for the number of laps needed to complete the race the #27 still scores 20 points for fifth place which means they get to keep their second-place finish in the championship.

There will be more news and content on the championship in the coming days.

Posters are available for digital download as well as in print from the GTR24H webshop, printing service and delivery provided by Printful.